For babies and children, ensuring an optimum iron supply is a global theme, as this trace element is vital for the healthy development of our little ones. Children who drink iron-enriched milk for infants and toddlers from their sixth month onwards suffer less from effects of iron deficiency than those who consume a lot of cow’s milk.

Tired and unable to concentrate? We all have such days. They come and go. But if several days extend to several weeks or even months, this might be a warning signal: Chronic fatigue and concentration disorders are often linked to an iron deficiency. Whether young or old – we all need energy for our mental and physical mobility.

For us, oxygen is an important energy source. To reach our organs via the bloodstream, oxygen needs a carrier: red blood cells, also called haemoglobin. If we have too little haemoglobin in our blood, our body will not get enough oxygen. As a result, our performance will drop. To be able to build a sufficient number of red blood cells, we need iron.

Children depend on iron

Most children get enough iron in the womb and are born with full iron stores. However, these stores are depleted after four to six months if babies do not receive any reinforcements through the food they consume.

From the sixth month, the child’s growth results in a major increase in the amount of blood. To form haemoglobin, the child now needs a lot of iron, namely about 50 per cent more than a grown man. Breastfeeding alone is no longer sufficient to ensure an adequate supply, as the iron content in the mother’s milk drops by half in the first six months after birth. For this reason, the child’s organism often reaches its first critical phase in terms of the iron level at the age of six months to three years. At the latest when this age is reached, iron-rich supplementary food should be given.

To develop healthily, a growing child needs about 50 per cent more iron than a grown man. 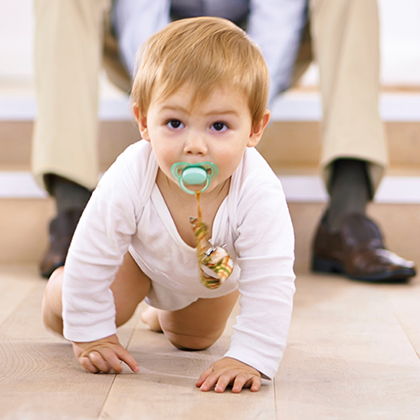