Financial year 2015 ushered in a new era for HOCHDORF. The restructuring in Switzerland, the clear definition of the three business areas and increased internationalisation have given the company a new dynamism. The redesigned annual report is a visible sign of this new HOCHDORF. The report section informs you about the strategy, financial situation and the three business areas of the HOCHDORF Group, Dairy Ingredients, Baby Care and Cereals & Ingredients. Furthermore, it provides you with information on corporate governance, compensation and the financial statements for 2015.

Earnings at the previous year's level

Despite all adverse circumstances, the HOCHDORF Group posted results for the last financial year on a par with those of the previous year. With gross sales of CHF 551.2 m, we surpassed half a billion Swiss francs for the first time ever. The increase in turnover can be explained by the acquisition of Uckermärker Milch GmbH and Marbacher Ölmühle GmbH. Without these acquisitions turnover would have declined. The main reason for this would have been the lower milk prices which resulted in lower selling prices for Dairy Ingredients. Another negative factor affecting the Group's turnover was the removal of the minimum exchange rate of the Swiss franc against the euro and the deliberate reduction in sales volumes at the milk plant in Prenzlau. EBIT was up slightly to CHF 20.1 m (+0.65%). This shows that the measures taken to increase efficiency are proving to be effective. However, it is also apparent that the companies acquired are still not making a contribution towards increasing revenue, as was announced. The Group made a net profit of CHF 13.0 m. The year-on-year decline is entirely due to exchange rate effects.

At the beginning of financial year 2015, HOCHDORF Swiss Nutrition Ltd introduced a new organisational structure. The results achieved in a relatively difficult economic environment show that the restructuring has been justified. The market focus on our three business areas, Dairy Ingredients, Baby Care and Cereals & Ingredients, has paid off for the entire HOCHDORF Group.

Integration of Uckermärker Milch GmbH and Marbacher Ölmühle GmbH was also initiated at the beginning of 2015. We were able to react relatively well to the currently challenging situation on the international milk market. We benefited from the fact that we only procured a small quantity of milk directly from milk producers. This is why we were able to reduce the production of milk powder due to poor product prices.

Marbacher Ölmühle is already connected up to the HOCHDORF merchandise management system. Since abandoning HOCHDORF Deutschland GmbH, we are now continuing part of this business from Marbach. 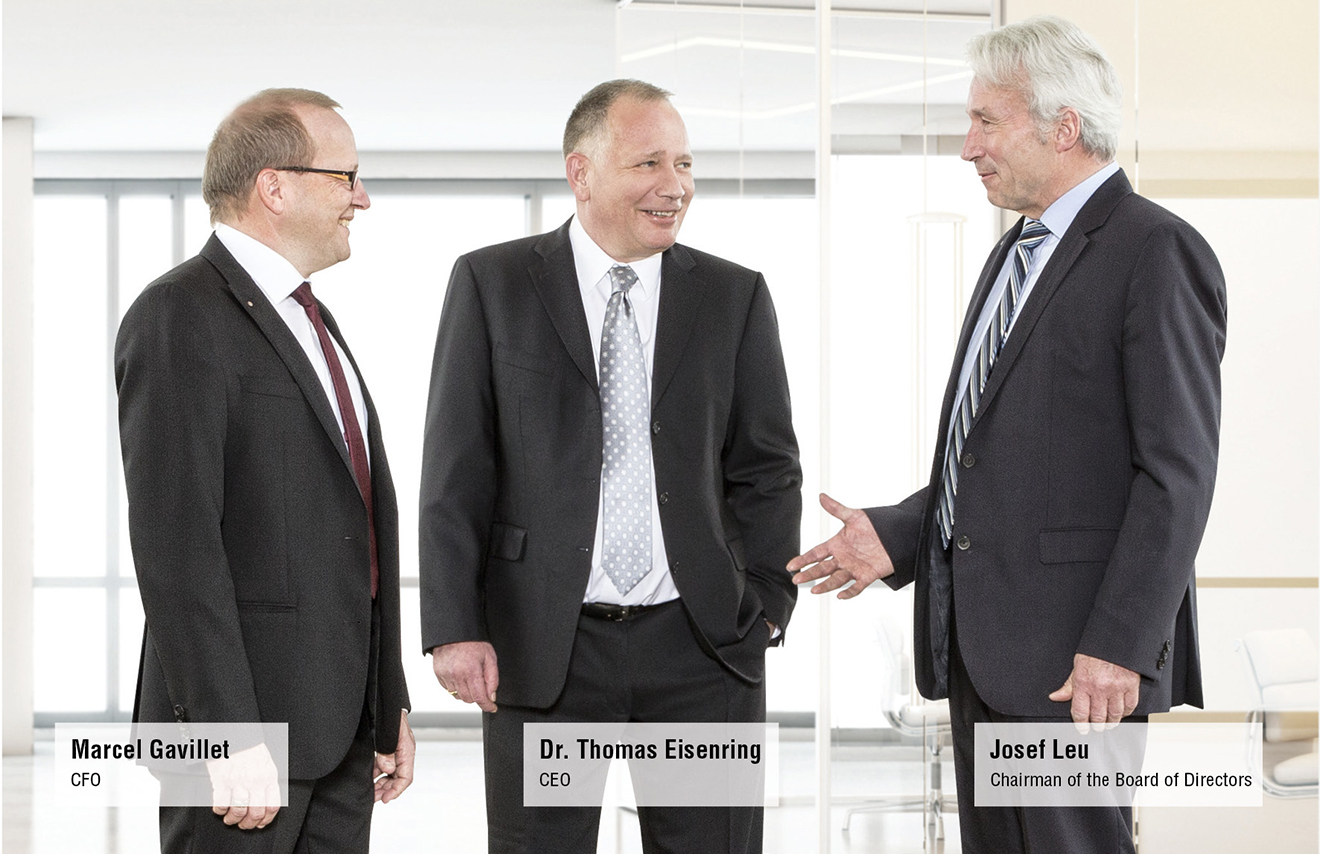 Development of a new strategy

We used some of the time from the middle of the year to develop a new strategy. With the implementation of Strategy 2016 – 2020, we have set a target of achieving much higher margins as a Group. All business areas will have to play their part if we are to achieve the rates of return we have set ourselves. The next few years will therefore be characterised by an offensive product strategy and forward integration. Both of these are essential if we are to achieve our target. Whether forward integration will be accomplished by our own efforts or whether we tackle it by joining forces with a customer is still undecided at the current point in time. However, the first of these two options will certainly take more time.

Besides the strategy, we also developed and adopted organisational regulations and a code of conduct in the past financial year. Receipt of the code of conduct and acknowledgement of its contents were attested by the signatures of the Board of Directors and all executives and staff.

Dynamism in the projects

In the half-yearly report we provided feedback on, among other things, the IonEx, LagLo, Kid’s Food and Kapamax projects. We would now like to give you a brief update on these projects.

A new major project illustrates the fast pace of the environment in which the HOCHDORF Group operates. In the middle of 2015, we started to plan the construction of a new production line for infant formula at the Prenzlau location, instead of converting the existing spray tower. We have now had to delay this project for a number of reasons. The main reason is the market success of our customers who rely on Swiss-made products. In view of the limited staffing and financial resources, the first thing we are now planning is a new spray tower with a filling line at our plant in Sulgen.

Change to the Board of Directors

Urs Renggli will be resigning from the Board of Directors at the forthcoming Annual General Meeting. We have been able to count on his expertise in matters of finance for the last eight years. We thank him for his work and wish him all the best for the future and good health.

The Board of Directors recommends Dr Daniel Suter to be elected as Urs Renggli 's successor. Dr Suter is an auditing partner at PricewaterhouseCoopers AG in Basel, and in this role he acts as chief auditor for a number of companies. Furthermore, since 2009 he has been a visiting lecturer for auditing at the University of Zurich, holding courses on internal and external audits.

International markets are still showing no sign of recovery at the moment. As market prices for milk products are still low, we now expect a gross sales revenue of CHF 560 to 600 m for the current financial year. Thanks to the ongoing internal projects, we expect an EBIT of 3.8 to 4.0% of production revenue. Neither of these figures include any possible forward integration.

We thank all customers, shareholders, employees and (milk) suppliers for the trust they have placed in the HOCHDORF Group in 2015. We also thank you for the future support that the HOCHDORF Group will be dependent on, in becoming closer to the end consumer.

Josef Leu
Chairman of the Board of Directors